Named one of the ten best books of 2017 by Beltway Poetry Quarterly.

“Leona Sevick’s debut collection, Lion Brothers, is a seductive book, one that takes the joys and terrors of dozens of ‘ordinary Wednesdays’ and from them, finds revelatory insights that answer the most fundamental questions about who we are. ‘Disloyal citizens are unburdened of their memories,’ she writes, but these poems remember with a keen and discerning eye. They seethe and soar in equal measure, and announce themselves in a voice that manages to deftly navigate the tightrope between history and calamity.”
— Steve Kistulentz, author of Little Black Daydream

“In Lion Brothers, Leona Sevick navigates the often overlooked complexities of familiar domestic roles: wife, mother, daughter. There are striking moments of tenderness here, but they don’t go by unexamined. Instead, Sevick catalogues and questions daily rituals and calamities. These poems quite gracefully praise and elegize the lessons a daughter learns while driving with her father. They attempt to prepare a son for a world marked by violence, to describe the childhood shame of a mother’s broken English that ‘carried whiffs of garlic and / fish sauce.’ ‘We hoped she would be silent,’ Sevick writes, never turning away from the difficult truth.”                                  —Corey Van Landingham, author of Antidote

“I admire this book’s intelligent darkness, its focus on the cracks and rifts between people trying to love each other unreservedly. I know the word ‘unflinching’ is a blurb cliche, but it does come to mind.”
— Lesley Wheeler, author of Radioland 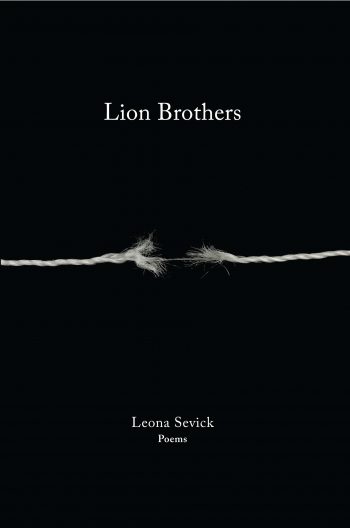